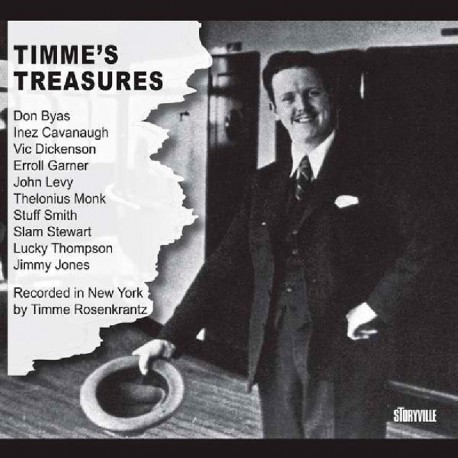 Known in New York and Denmark as the Jazz Baron, baron Niels Otte Timme Rosenkrantz was a man of many talents and many friends. On this CD, we find exclusive recordings of some of the grand musicians of Harlem’s golden jazz age – most of it recorded in Timmy’s (as the Americans nicknamed him) private Manhattan apartment, where the jazz society came to party and play.

This CD features tracks performed by renowned artists such as Stuff Smith, Thelonious Monk, Don Byas and pianist Erroll Garner, whom Timme Rosenkrantz is actually credited for discovering and being the first to record. The CD is the first ever release of these private recordings from the mid-1940s.

Carefully selected from the archives at the Music Library of the University of Southern Denmark by experts, the old tracks have been digitally cleaned and remastered, providing us an array of interesting material. Timme’s Treasures features extraordinary gems from a riveting epoch of jazz, and the CD is an unexpectedly recovered treasure chest, teaching us an important history lesson on musicality.