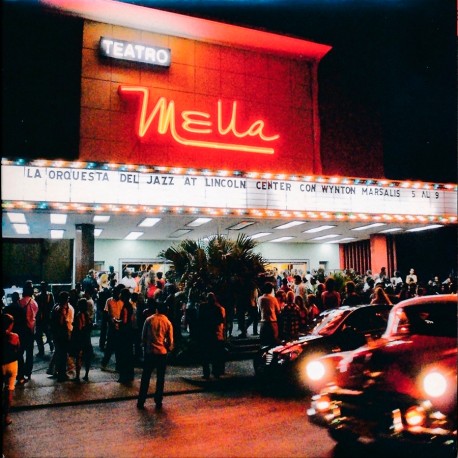 This album presents nine-time Grammy Award-winner Wynton Marsalis and the world-renowned Jazz at Lincoln Center Orchestra’s dazzling first, and only, performances in Cuba.

Recorded in front of a clamorous, sold-out crowd at Havana’s Mella Theatre in October 2010, this two-disc album captures the big band’s unforgettable tracing of the connections between American jazz and Afro-Cuban music. LIVE IN CUBA is the inaugural release from Blue Engine Records, the new platform created by the JLCO to make available its vast archive of recorded concerts to jazz audiences.

The Havana concerts came about following President Obama's initial easing of travel restrictions between the U.S. and Cuba nearly five years ago. It was then that the Cuban Institute of Music invited the Jazz at Lincoln Center Orchestra with Wynton Marsalis to come to Cuba.

During the week-long stint at the Mella Theater, the band played a wide variety of pieces from jazz classics like Duke Ellington's "Braggin' in Brass" to music of the Cuban diaspora such as "The Afro Cuban Jazz Suite," Arturo "Chico" O'Farrill's singular masterpiece.

This recording is a compilation of songs chosen from the Havana shows. Marsalis and the Jazz at Lincoln Center Orchestra left Cuba having been greatly impacted by the warm Cuban reception. As Wynton recalled to his son in the album's liner notes, "We were finding each other, and this opportunity has forever changed our lives.