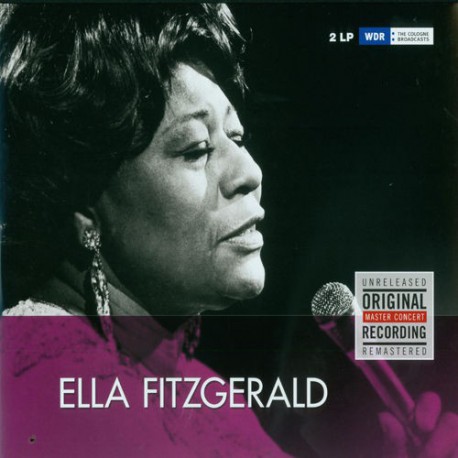 A NEVER BEFORE RELEASED PERFORMANCE IN BRILLIANT SOUND QUALITY!!!
ELLA AT HER BEST FEATURED WITH TOMMY FLANAGAN, ROY ELDRIDGE AND EDDIE "LOCKJAW" DAVIS.

One of only a few jazz vocal queens, Ella Fitzgerald (1917-1996) was an inspiring individual who, against all odds, rose from extreme poverty to fame thanks to her immense talents. In a world where female vocalists were usually beautiful stylized girls, Ella’s inimitable voice and indomitable sense of swing earned her a place above the rest and in almost no time she became the Chick Webb orchestra’s primary draw. From then on, she sang and recorded with many of the most important jazz figures and was revered as a living legend throughout the remainder of her life.

This remarkable previously unissued performance, recorded in Germany in 1974, showcases Ella accompanied by old friends and collaborators. She sings “Just a Lucky So and So” and “Now’s the Time” backed by the great Roy Eldridge on trumpet  and Eddie “Lockjaw” Davis on tenor sax, and she is backed all throughout by the splendid rhythm section of Tommy Flanagan, Joe Pass, Keter Betts and Bobby Durham.
Among the many highlights is Ella’s reading of “Good Morning Heartache”, a song popularized by Billie Holiday, and which, as Ella herself announces, had been recently used in the Holiday biographical feature Lady Sings the Blues. Also worth mentioning are her versions of the classic Jobim bossa nova “The Girl from Ipanema” –appropriately renamed by Ella “The Boy from Ipanema” –, a new performance of her hit “Mack the Knife” from the Kurt Weill-Bertolt Brecht Threepenny Opera, and a tour-de-force on “The Man I Love” which goes on for more than eight minutes!

01. There'll never be another you
02. Good morning heartache
03. Different kinds of music
04. It don't mean a thing