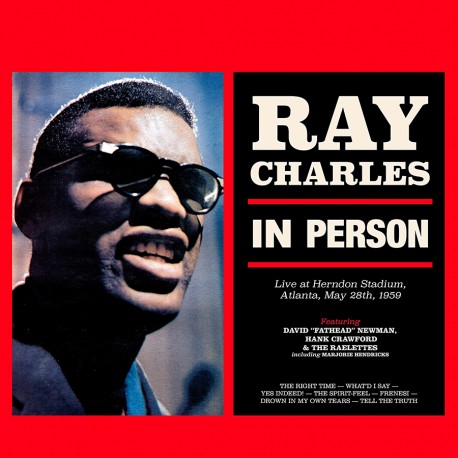 This LP edition includes Ray Charles’ sensational live album Ray Charles in Person, recorded on May 28, 1959 with one single mike, high above the stage, at the Morris Brown College’s Herndon Stadium, Atlanta, Georgia. The recording was held at the radio station WAOK’s 5th anniversary celebration during a concert attended by a crowd of 9,000-plus people (mostly African- American) which roared in greeting when Ray Charles walked on stage despite the rainy weather. The album was released in May 1960 by Atlantic Records with the reference number 8039. This is an essential document of this phase of his career when Charles established his own touring and recording band (a virtual who’s who of fabulous musicians from the New York City scene, such as David “Fathead” Newman on tenor and alto sax, Bennie “Hank” Crawford on baritone, Lee Harper & Marcus Belgrave on trumpet, and Edgar Willis on bass, as well as the female vocal quartet The Raelettes on backing vocals). With them, he developed his unique blend of jazz, blues and gospel until it reached a level resembling a force of nature.

SIDE 1 [3]: Same personnel as above except Lee Harper replaces John Hunt on trumpet and Richie Goldberg replaces Teagle Fleming on drums.

(*)  Bonus tracks: Same personnel, place and date as above.