The Call of The Wild and Peaceful Heart (SSR-1607) 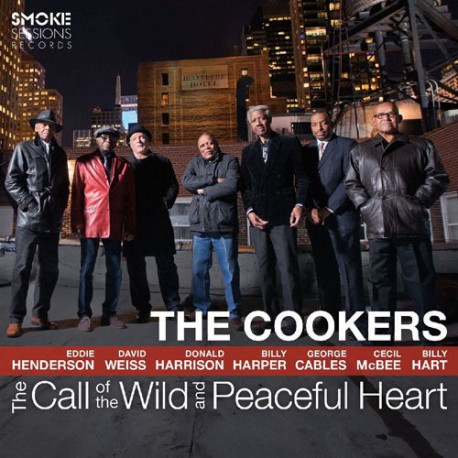 The Call of The Wild and Peaceful Heart

The Call of The Wild and Peaceful Heart

For their fifth CD release the super-star jazz ensemble, The Cookers, have moved to the Smoke Sessions Records label.  This is a smart move artistically as Smoke Sessions have been releasing some of the best hard bop and progressive jazz issues over the last several years.

The band is composed of seven true veterans who manage to sound fresher and tougher than anyone. This is hard-bop with a seasoned edge very difficult to match. After nine years together, The Cookers have grown from a summit of swinging road warriors to become one of the fieriest and hardest-hitting bands on the jazz scene today and keep the flame of hard-bop brightly burning.

The band is unique in the modern jazz scene, it reflects more than four decades of rapport and shared experiences, as well as first-hand knowledge of the seismic shifts in the music that younger musicians only know through records and stories. These musicians were right there when some groundbreaking stuff happened, and they stll approach the music that way.

Diversity defines the spirit of "The Call of the Wild and Peaceful Heart". The name of the album tells a lot about the music. Penned by Harper, it rhythmically opens ever so slowly and peacefully. Later it explodes with the wild excitement of Harper’s tenor.

The whole album runs outstandingly free while referencing musical touchstones from the past. Their music demands concentration, but you will be tapping your feet as well as it confirms that they are master chiefs of the bandstand still.