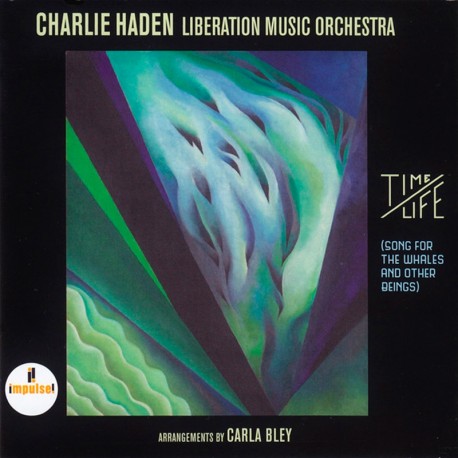 Charlie Haden assembled his Liberation Music Orchestra, the majestic, politically inspired, big band he founded with Carla Bley in 1969, occasionally, and only when he had something he wanted to say. This album also documents his latest recordings with the orchestra in 2011. He would die in July 2014.

The concept for Time/Life originated in 2007 when Charlie felt the environment was being abused to such a dangerous extent that they had to speak out about it. It was long overdue. Four years later in August, the Liberation Music Orchestra performed at the Middelheim Jazz Festival in Antwerp, Belgium. Bertrand Flamang, the Antwerp festival director, wanted the thematic focus for that year to be on the environment. So with Carla Bley’s ingenious arrangements, the Liberation Music Orchestra delivered a luxuriant rendering of Bill Evans - Miles Davis Blue in Green and an evocative exploration through Song for the Whales, a lamenting composition Haden penned in 1979, and first recorded with the band Old and New Dreams.

Two of these five pieces were recorded at the Middelheim Jazz Festival in Antwerp and are the ones in which Charlie is playing. The others, made two years after his passing, were scored by Carla Bley and with Steve Swallow filling in on bass and recorded at Avatar Studios in NY.