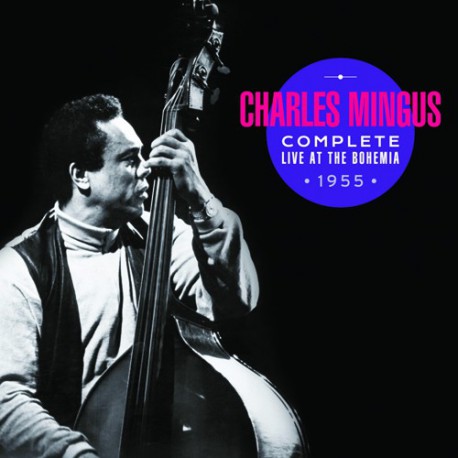 Complete Live at the Bohemia 1955

All of the music recorded by the Charles Mingus Quintet with Max Roach as the guest star during a fruitful and extended evening in 1955. Includes 5 bonus tracks.

This 2-CD set compiles all of the music recorded by the Charles Mingus Quintet with Max Roach as the guest star during a fruitful and extended evening in 1955. Most but not all of the material appeared on the LPs "Mingus at the Bohemia" (Debut Records DEB-123) and "The Charles Mingus Quintet Plus Max Roach" (Fantasy 6009), while the rest were issued on different compilations.

The concert presents Mingus at a time in which he had found his musical identity. His group is augmented by the great Max Roach as a special guest, and both masters play, among other tunes, an amazing duet titled “Percussion Discussion”. Mal Waldron’s piano is another of the highlights.

An extremely rare broadcast showcasing Mingus’ group also at the Bohemia the following year has been added as a bonus, including a version of “What Is This Thing Called Love” on which Phineas Newborn, Jr. replaces Waldron on piano. No other recordings of Newborn and Mingus together are known to exist! Studio versions of two of the tunes taped at the Bohemia, “Haitian Fight Song” and “A Foggy Day” complete this release.