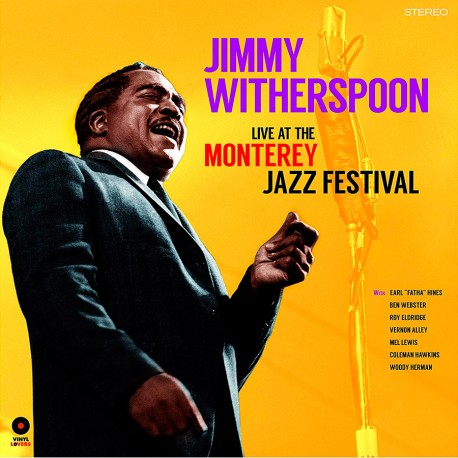 This essential LP edition includes the blues giant’s sensational live album, "At The Monterey Jazz Festival",which was originally released in 1959 on the HiFi Jazz label. This long play is filled with superb tracks featuring tremendous solos and great accompaniment by Coleman Hawkins, Ben Webster, Roy Eldridge, Woody Herman and Earl Hines, among others. “During the courseof the set Jimmy Witherspoon sang at Monterey”, recalled journalist Ralph J. Gleason, “there were many moments that remain in my memory. Most of them are on this album. For instance, there’s the great introduction Earl Hines plays on ‘Ain’t Nobody’s Business’ …Roy Eldridge’s meted trumpet on the same tune …’Spoon crooning ‘rain, rain’ later in the song and then Ben Webster’s magnificent solo. Ben started to blow that solo and a thrill ran through the audience.”

In addition to the original masterpiece, this Vinyl Lovers collector’s edition also includes 2 bonus tracks from the same period: “Froggy Bottom” and “Oo Wee, Then the Lights Go Out.” All of these fabulous songs give a solid and revealing portrait of Witherspoon’s genius as well as his rightful place in the blues pantheon.