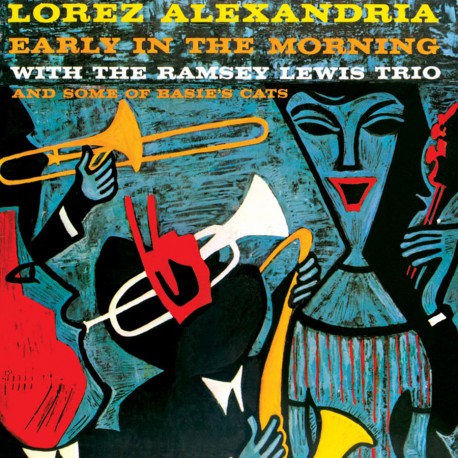 Two complete long unavailable LPs by cult jazz singer Lorez Alexandria, backed by great stars like Ramsey Lewis, Frank Foster, Frank Wess, Al Grey, Freddie Green, Joe Newman, and Howard McGhee.
Early in the Morning appears here on CD for the first time ever, while Deep Roots has only previously appeared on CD on a long out of print Japanese edition.
As a bonus we have added further songs by Lorez, including two versions of “Baltimore Oriole”, the song she would be most closely associated with.
Includes 16-page booklet

Note: the dates for this session were previously listed as March 15-17, 1960 (these are the dates that appeared on the original LP).

However, the members of the Count Basie band who participate on this session were in New York at the time.


“Lorez Alexandria; Jazz Singer Noted for Style” read the obituaries section of The Los Angeles Times on May 24, 2001.
The short article began with these words: “Lorez Alexandria, a jazz singer highly respected by musicians and other singers even though she never quite achieved the wide recognition her talent merited, has died. She was 71. Alexandria died Tuesday [May 22] at Gardena Memorial Hospital of complications from kidney failure, said her son, Michael Martinez of Reno. She had been in failing health since having a stroke shortly after she retired from performing five years ago.”

Born Delorez Alexandria Turner in Chicago, Illinois, on August 14, 1929, she sang first in gospel and choral groups. She began as a singer in churches in her teens, and spent 11 years as part of an a cappella choir. Her recording career began on February 25 and March 5, 1957, when she waxed the LP This Is Lorez.
The first album included here, Early in the Morning, marked her fifth LP (however, it would only be her fourth album issued). Side A featured Lorez with the rhythm section, while on Side B the Basie-ites were added. Backed by strings and a rhythm section, Lorez recorded her next album, Sing No Sad Songs For Me, in late 1960 and early 1961. This was followed by the second album contained here: Deep Roots, which features the singer backed only by a rhythm section with the addition of bebop trumpeter Howard McGhee. Beginning in 1958, bassist Israel Crosby and drummer Vernell Fournier would form two thirds of the celebrated Ahmad Jamal Trio (Crosby would suddenly die from a heart attack on August 11, 1962 –just six months after recording Deep Roots. He was only 43-years old).