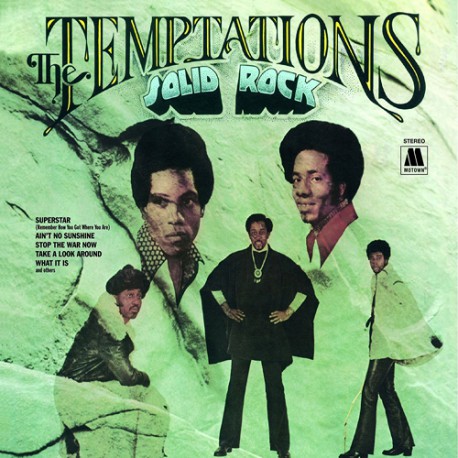 "Solid Rock" (1972) is The Temptations’ first album made primarily without founding members and original lead singers Eddie Kendricks and Paul Williams. It is a masterful LP of righteous trippy soul, recorded during the height of The Temptations’ strong association with Norman Whitfield.

The album has more than a few political/social conscience songs – such as “Take a Look Around”, “Stop the War Now”, and “Superstar (Remember How You Got Where You Are)” – but the strongest point is the music, more than the message. The arrangements are super funky – with complicated stretched out passages filled with spacey effects, rumbling bass, fuzzy guitars, and cool processing on the vocals. “The End of Our Road” has some great tight drums, and “What It Is” begins with rolling snare work that’s in a Sly Stone sort of groove. Vocals are great as always, and the album also features a long mellow cover of Bill Withers’ “Ain’t No Sunshine”.

Recorded at Hitsville U.S.A. (Studio A) and Golden World Studios (Studio B),
Detroit, Michigan between November 1971 and January 1972.

06. Superstar (Remember How You Got Where You Are)
Lead singers: Dennis Edwards, Damon Harris, Melvin Franklin,
Richard Street, Otis Williams

08. The End of Our Road
Lead singer: Richard Street