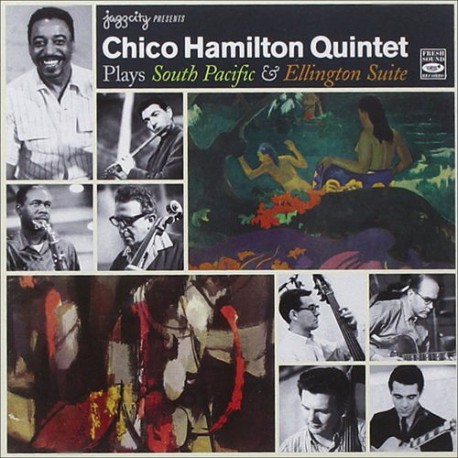 The Chico Hamilton Quintet—in the first of the two albums included reshapes eleven pieces of the popular Broadway show “South Pacific” into new patterns of sound and rhythm. Chico explained that they had “kept the jazz sounds wherever we felt there should be jazz. The tunes were extremely difficult to arrange because the majority were both good and simple; one of the hardest things in music is to retain simplicity.” The arrangements of Paul Horn, Hal Gaylor, John Pisano, Carson Smith and Calvin Jackson left us one of the happiest renditions of this show.

On the second album, the original Hamilton quintet, plus Paul Horn, reunited to play a fine collection of Ellington originals with the understanding and rare perspicacity only they could provide. The group operates entirely within a flexible framework, provided by Carson Smith’s arrangements. The men are all highly capable, and the solo work is very good. Buddy Collette’s tenor and Jim Hall’s lucid guitar are great assets to this set. Ellington’s subject matter, combined with Hamilton’s brilliant colors, produced a set that is as delightful as it is intriguing.

All the music you will find here is attractive and very much alive; you have two fabulous groups led by Hamilton to thank for it.