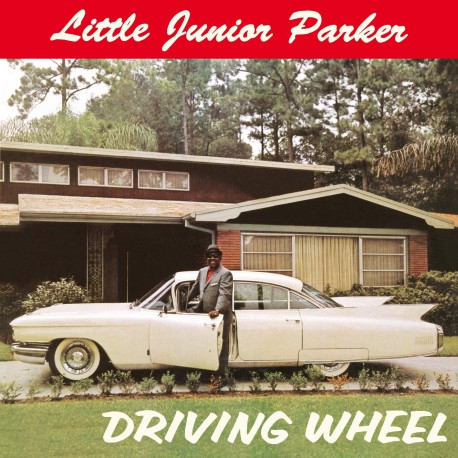 The legendary Little Junior Parker is considered more of an R&B stylist with distinct blues leanings than a true blues artist. He could sing in a harder yet soulful R&B style and then switch to a smoother sound sometimes reminiscent of the great Charles Brown, or Bobby “Blue” Bland. As consistently modern a bluesman as he insisted on being, he’d placed his Sonny Boy Williamson-influenced harmonica interjections on the back burner to emphasize his smoothly burnished vocals on R&B-styled material. Although Junior Parker had been on the scene since the early 1950s (recording numerous singles for different labels), his first long play was not issued until 1962 (by Duke Records). This essential CD edition includes Parker’s debut album, Driving Wheel, in its entirety. Parker’s exceptional touch and versatility can be heard across these tracks, which consist of a magnificent mix of emotional blues, jump tunes, electrifying moments, and soulful slow-tempo numbers. In addition to the original masterpiece, this remastered collector’s release contains 16 bonus tracks, among them the cornerstone “Mystery Train,” recorded at Sun Studio in October 1953 (the song would gain greater fame with Elvis Presley’s later cover).

Further personnel information is detailed inside.
Recorded in Chicago and Nashville, between 1960 and 1962.