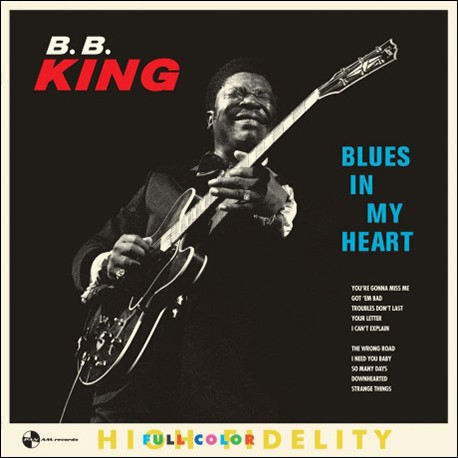 Blues in My Heart

This collector’s release includes B.B. King’s sensational LP, Blues in My Heart, which marked the penultimate of his twelve albums on Crown Records (a budget imprint founded in Los Angeles by Lester, Jules, Saul and Joe Bihari – four brothers and American businessmen of Hungarian Jewish origin, who also ran the Modern, Kent and RPM labels). It was originally released in 1962 (and later reissued on Custom Records as A Heart Full of Blues), although the tracks had probably been recorded in late 1961 as part of the stockpiling process before B.B. King switched to the ABC Paramount label. He is showcased here in a small combo setting with ample room for his strong guitar fills and concise solos. The great Plas Johnson supplies the smoky tenor saxophone backing while Maxwell Davis is featured on keyboard.