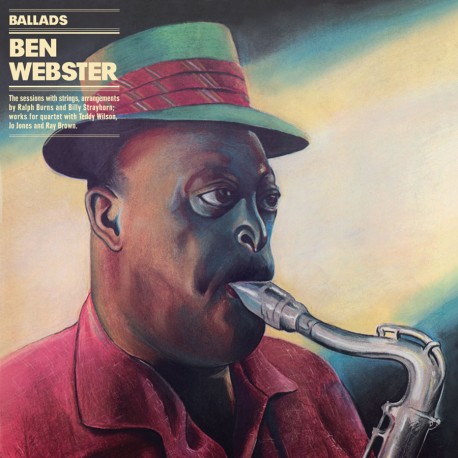 The ballad sets included here mark almost the beginning of Webster’s new musical direction. They were originally issued on two LPs, titled "Music with Feeling and Music for Loving", which compile the results of four different sessions. Three of these dates were big band/string efforts – one conducted by Billy Strayhorn (who also played the piano) and two by Ralph Burns. The fourth session consisted of four quartet tunes. All of this music was brought together shortly after Ben Webster’s death in 1973 and reissued on a 2-LP set as Ballads. It was under this title that these already successful recordings became true classics. This CD compiles the three big band sessions in their entirety. It also includes an interesting quartet version of “Almost Like Being in Love” recorded at the Billy Strayhorn date which completes the session (it wasn’t included on the original album Music for Loving, nor on Ballads). However, due to time limitations, two quartet selections from the last session with Teddy Wilson (“Love’s Away” and “You’re Mine, You!”), which originally rounded out the two aforementioned LPs, have been omited.