> Sellos>Waxtime>Both Sides of an Evening 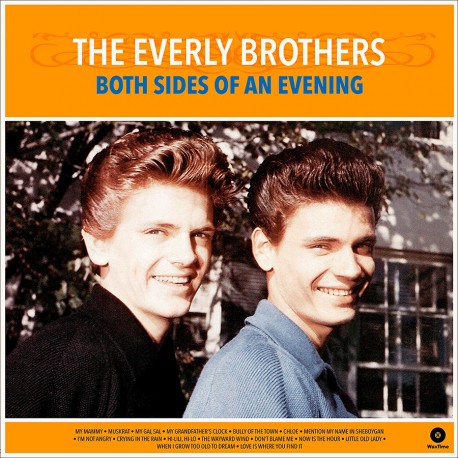 Both Sides of an Evening

This quintessential Waxtime edition presents The Everly Brothers’ complete sixth album, Both Sides of an Evening. Originally released by Warner Bros.in September 1961, it is one of the duo’s finest hidden treasures. The LP showcases the brothers’ extensive range and expertise, and is an excellent way to explore their talents. In some ways, Both Sides of an Evening was the duo’s most ambitious and mature record to date. It influenced everyone from Simon and Garfunkel to The Hollies. Most of the first side worked beautifully – their version of “Muskrat” was given a shimmering Bo Diddley-style “shave and a haircut” beat, while the duo put a fresh (and unexpected rock) spin on “My Mammy”, which had been a big hit for Al Jolson in the thirties. In addition to the original masterpiece, this collector’s edition also contains 4 bonus tracks, including splendid singles from the same period, such as the enchanting “I’m Not Angry,” the soulful “Crying in the Rain,” the rocking beat of “Temptation,” and the joyful “It’s Been Nice”.

SIDE ONE / FOR DANCING

SIDE TWO / FOR DREAMING