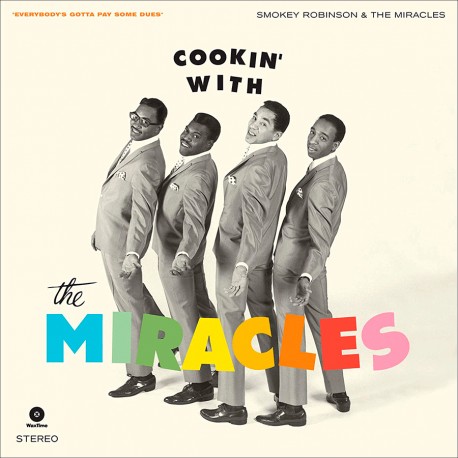 Cookin´ with The Miracles

This release includes the group’s splendid second album, Cookin’ with The Miracles (1962), originally issued on Tamla Records* in 1962, and long unavailable on vinyl. In addition to the original masterpiece, this WaxTime collector’s edition contains 4 bonus tracks from the same period, among them their 1958 debut single, “Got a Job,” an answer to The Silhouettes’ “Get a Job.” It was released on Robinson’s 18th birthday. Another hard-to-find single presented here is an outer space ovelty, titled “It,” by a duet called Ron and Bill which was leased to the Argo label, a Chess Records subsidiary. Ron and Bill were Ronnie White and Bill “Smokey” Robinson.

These fabulous recordings mark the foundation upon which Detroit soul was built. The Miracles played a key role in helping transform the Motor City and the record company named after it, into an international center of popular music.