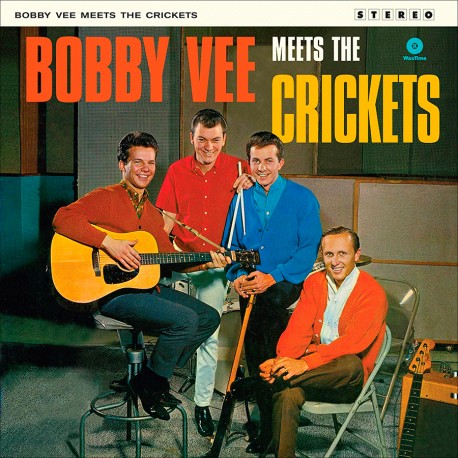 This special LP edition includes the rocking Bobby Vee Meets The Crickets – one of Vee’s outstanding collaborations with Buddy Holly’s backing band. It was originally released by Liberty Records in July 1962 and has been long unavailable on vinyl. Because of Buddy Holly’s strong influence on Vee’s sound, it was only natural that in the latter’s collaboration with The Crickets, they would record the first tribute to Holly (who had died in a plane crash in 1959, which also took the lives of Ritchie Valens, and J.P. “The Big Bopper” Richardson). On Bobby Vee Meets The Crickets, the band cut outstanding versions of rock & roll standards made famous by Chuck Berry (“Sweet Little Sixteen”), Roy Orbison (“Looking For Love”), Little Richard (“Lucille”), Elvis Presley (“The Girl of My Best Friend”), Bo Diddley (“Bo Diddley”), and, of course, Buddy Holly (“Peggy Sue,” “Well… All Right”), among others.

In addition to the original 1962 album, this WaxTime collector’s edition includes 2 BONUS TRACKS, which were cut by Vee that same year: “That’ll Be the Day” and “Think It Over.” Although both songs are compositions by Buddy Holly, The Crickets did not participate here.

Recorded by Eddie Brackett and Jim Economides in California, 1962.