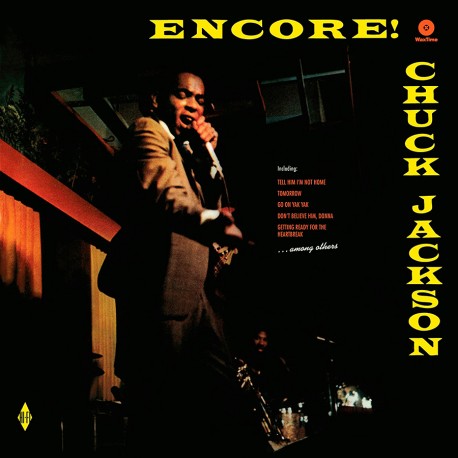 This essential LP edition includes Jackson’s magnificent third LP, Encore!, which was originally issued in the early Sixties by the Wand label (which was a subsidiary of Scepter Records), and has been long unavailable on vinyl. It opens with “Tell Him I’m Not Home,” a stinging tale of romantic rejection that became the LP’s biggest hit and one of its brightest moments, complete with a powerful backing vocal courtesy of Doris Troy. Jackson’s rich baritone vocals were the perfect focus for the sophisticated uptown New York soul that became the trademark sound of Wand. He was widelyrespected on the R&B and early soul scene, scoring hits with other great songs such as “Tomorrow,” “King of the Mountain,” “Getting Ready for the Heartbreak,” “Invisible,” and “Go on Yak Yak” (the latter was co-written by Jackson and Luther Dixon).

In addition to the original masterpiece, this WaxTime collector’s edition also includes 4 bonus tracks, consisting of overlooked gems from the same period: the poignant “The Breaking Point,” the joyful R&B number “Hula Lula,” the soulful “In Between Tears” and Jackson’s splendid version of the Burt Bacharach & Hal David slow staple “I Wake up Crying.”

All of these soulful, stylish and passionate recordings continue to stand the test of time. Enjoy!