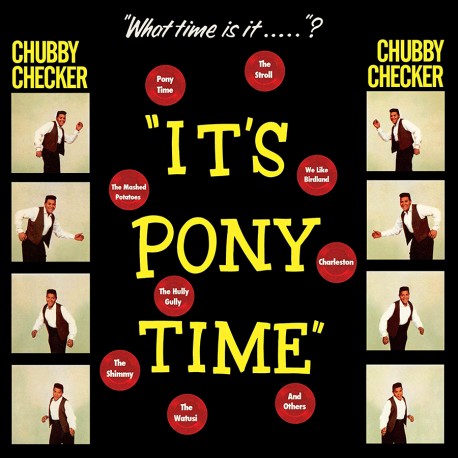 This edition contains Chubby Checker’s celebrated LP, It’s Pony Time, originally issued on the Parkway label in 1961, and long unavailable on vinyl. Album highlights include some of the singer’s follow-up smashes like “Pony Time,” “Hi Ho Silver,” “The Mess Around,” etc., as well as a host of other dance-craze songs from that era, such as “The Watusi,” “The Hully Gully,” “The Stroll,” “The Shimmy,” and B“The Mashed Potatoes” (which preceded his labelmate Dee Dee Sharp’s hit “Mashed Potato Time” by a year).

In addition to the original masterpiece, this WaxTime collector’s LP contains 2 bonus tracks from the same period, consisting of the catchy “Popeye,” and the joyous “Side by Side,” the latter featuring Bobby Rydell on backing vocals. This LP release is a perfect choice for anyone looking to explore Checker’s finest recordings from his most prolific period. Enjoy it!