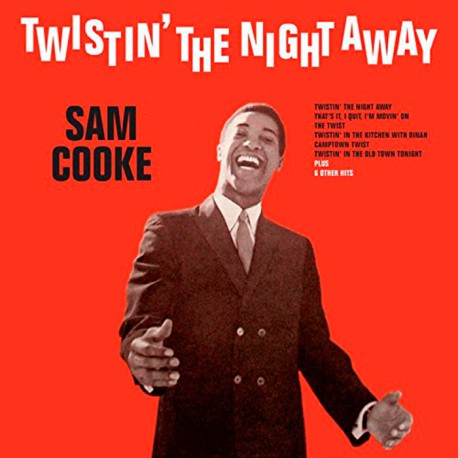 Twistin´ the Night Away

Available again on vinyl, this quintessential collector’s edition includes Sam Cooke’s sensational album, Twistin’ the Night Away, originally issued by the RCA Victor label in 1962. It was Cooke’s second effort following his 1957 debut LP, and remains one of the singer’s most accessible records despite the fact that the material consists primarily of “Twist” numbers chosen by the producers to cash in on that craze. Cooke was shoehorned into doing numbers like “Camptown Twist”, “Twistin’ in the Kitchen With Dinah”, and “Twistin’ in the Old Town”, as well as his version of Hank Ballard's “The Twist”.

He is at his most soulful, exciting, and passionate, on the popular title track “Twistin’ the Night Away”; the bluesy “Somebody Have Mercy”; the romantic lament “Somebody’s Gonna Miss Me”; the ebullient “Sugar Dumpling”; the achingly beautiful “A Whole Lot of Woman”; the soaring “Soothe Me” (with Lou Rawls); and the slow dance number “Movin’ and Groovin’”. In 2001, music critic Bruce Eder declared, “Twisting the Night Away is not only one of the great dance albums of its period, but a brilliant soul album as well, which is why it holds up 40 years later.”

In addition to this masterpiece includes 2 bonus tracks from the same period.