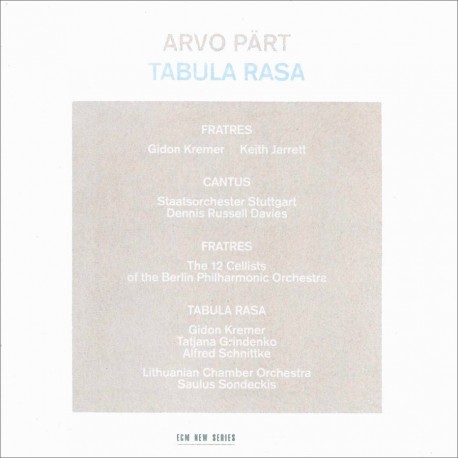 In 1984, ECM brought a new sound into the musical world with the release of Arvo Pärt’s Tabula rasa, the first album on the label’s New Series imprint.Now, on the occasion of Pärt’s 75th birthday, this special edition with enclosed CD has been produced by ECM in collaboration with the composer’s publisher, Universal Edition. It includes previously unpublished manuscript scores of Tabula rasa and Cantus in Memory of Benjamin Britten, and study scores of the album’s four works, as well as Wolfgang Sandner’s 1984 liner essay, and a new introductory note for this edition by Paul Griffiths. Rounding off the volume is a discography of Arvo Pärt’s works on ECM with corresponding publishing details.