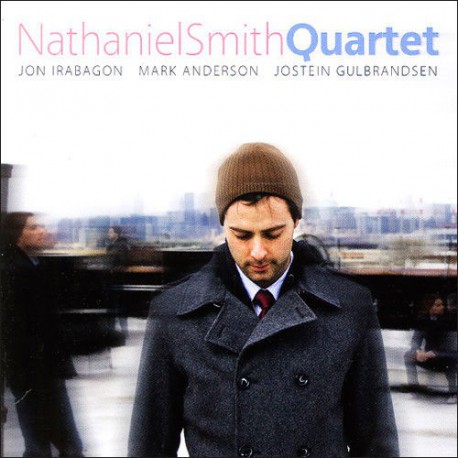 Notificarme cuando esté disponible
"Quartet" can be viewed as a document of the group I led and played with for the several years immediately after grad school. The tunes featured on this record are by me and Jostein, and had been played in many a venue to every size of crowd for years before we recorded them. I particularly love playing Jostein's music, and I'm ecstatic that he gave his permission to record two of his excellent tunes, both of which embody artistic maturity, saying a lot with a little. 'Daybreak And Then Dusk' and 'Tortoise Pendant' were heavily influenced by David Liebman's composition class. 'Actionable Intelligence' and 'Shadow Puppet' are reflections of the music I was listening to at the time, some of which you can probably guess [...]

Smith wrote five of the seven pieces here, and each one possesses admirable traits. "Daybreak And Then Dusk" starts things off, with Irabagon's swooning saxophone sliding over the group, but the followup, "Tortoise Pendant," is more memorable. Bassist Mark Anderson locks everything into place for this groove in eleven, guitarist Jostein Gulbrandsen provides some gleaming chordal work, and the piece ends with Irabagon and Gulbrandsen gleefully delivering dovetailing lines over one another.

Gulbrandsen's two compositional contributions show some contrast in his writing style. "Return Of The Bear" is built on twisty rhythms, with Irabagon heating things up during his solo, while "Tomorrow's Perfume" is a dreamy, sparsely populated piece. Smith's brushwork here, and his ability to conjure a variety of sounds out of his cymbals and off his kit, is remarkable and adds greatly to the aural atmosphere that the quartet creates.

A hip, understated groove underscores "Actionable Intelligence" and Irabagon is superb, in his most straightforward performance on the album. When he hands the baton over to Gulbrandsen, the guitarist comes in with a biting tone that only pops up on this track, and the rest of the rhythm section loosens up behind him. "Travishamockery" is blues filtered through Smith's modernist mind, and Gulbrandsen's soloing has a blues-jazz-fusion-country hybrid twang to it. Anderson steps out front as a featured soloist here, and Smith delivers some fine drum work when the solo trading begins.

The album closes with the buoyant "Shadow Puppet," which reaches its apex when Smith solos with accents that work against Anderson's established pulse. Once again, the Fresh Sound New Talent label has found an artist that perfectly reflects the ideals within its name."

Mixed and engineered by Michael Brorby at Acoustic Recording, March 2008.