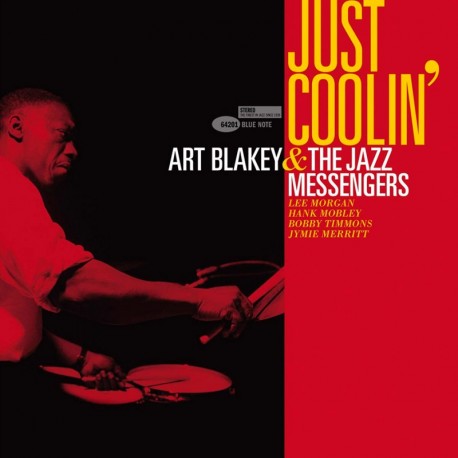 The legendary Blue Note label presents Just Coolin’, a Never Before Released 1959 Art Blakey & The Jazz Messengers studio album, which has been waiting in the vaults for the last 60 years! This is an obvious motive for happiness for jazz fans, mostly considering that the immortal 1959 Messengers consisted of trumpeter Lee Morgan, tenor saxophonist Hank Mobley, pianist Bobby Timmons, and bassist Jymie Merritt, plus the leader on drums. The session was taped at Rudy Van Gelder’s Hackensack, New Jersey studio on March 8, 1959, and includes six songs, among them two compositions, “Quick Trick” and “Jimerick”, that Blakey never recorded again either live or in the studio, and that are heard here for the first time ever.

The other four compositions, “Hipsippy Blues”, “Close Your Eyes”, M+M” (aka “M and M”), and “Just Coolin’” would be recorded again by the group live at Birdland on April 15 of that same year and included on the LP At the Jazz Corner of the World (probably the reason why this date never made the light in its time). The studio versions on Just Coolin’ are, thus, the earlier ones and the only alternative versions by the Messengers for most of these titles (“Just Coolin’”, a Hank Mobley tune, had been recorded in 1955 by its composer but there are no more versions by the Messengers other than the aforementioned two; only the standard “Close Your Eyes” was revisited by the group and became a part of their regular concert sets). A more than welcomed and anxiously expected release, and a true gift for jazz lovers in these hard times!!!