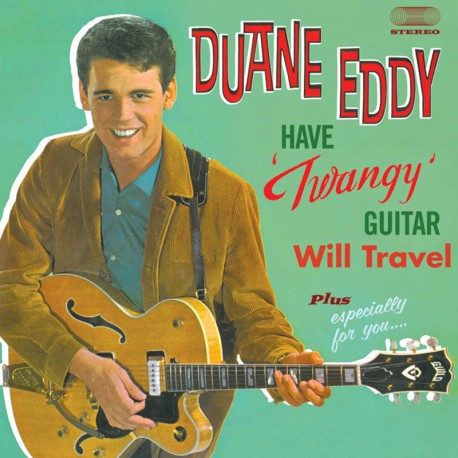 THE UNDISPUTED KING OF TWANG

“DUANE EDDY WAS THE FRONT GUY, THE FIRST ROCK AND ROLL GOD." John Fogerty
America’s first bona fide rock & roll guitar hero, and one of early rock’s most influential and popular instrumentalists, Duane Eddy devised a technique of playing lead on his guitar’s bass strings to produce a low, reverberant “twangy” sound. He had 15 Top-40 hits between 1958 and 1963, and his opening riff of his debut single, “Moovin’ and Groovin’”, would be lifted by The Beach Boys five years later to open their hit song “Surfin’ U.S.A.” Eddy’s next single “Rebel-Rouser” reached the Top-10 in 1958 and launched the guitarist to international stardom. Opening with a down-anddirty, heavily echoed guitar riff, it remains the tune with which he’s most often identified.
This special collector’s edition compiles Eddy’s two first and finest albums: his debut LP, Have ‘Twangy’ Guitar ~ Will Travel (1958) and Especially For You (1959). Both rock & roll gems contain the cream of the crop from Duane Eddy’s hit-making stretch for the Jamie label during his early years. In addition, we have included 4 bonus tracks from the same period. All of these fabulous recordings were co-produced by the always fascinating Lee Hazlewood and feature a virtual who's who of great musicians including Buddy Wheeler, Al Casey, Larry Knechtel and Plas Johnson, among others.
PERSONNEL:

DUANE EDDY, lead guitar on all tracks, plus:

Further personnel information is detailed inside booklet.
Recorded in Hollywood, California, and Phoenix, Arizona, between 1957 and 1960.
Original recordings produced by Lester Sill and Lee Hazlewood.