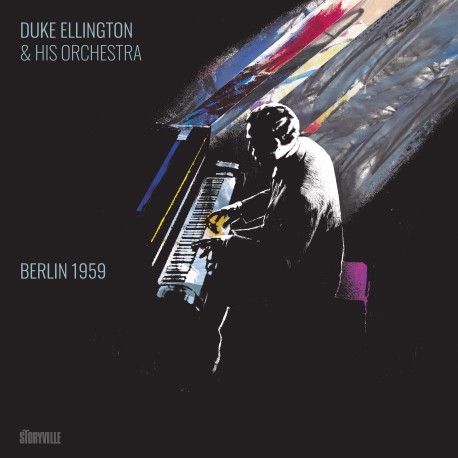 What we have here is the welcome memento of Duke Ellington and his band’s 1959 European tour. Berlin’s Sportpalast is not a concert hall and was often used by the Nazi regime for party speeches and rallies, but, by the time of this concert, the hall had been thoroughly purified by sounds of jazz. The music starts with the Ellington Medley, by then a standard concert opener in varied embodiments. Critics often chided Duke for (in their opinion) overdoing this staple, but in fact it was not only a clever way of dealing with what undoubtedly would have been audience requests for beloved Ducal standards, but also a way of celebrating the continued life of his musical heritage. It also was subject to constant change, some due to new voices in the band, but most caused by Ellington’s own way of not making it a bore for his musicians. The Medley has a longer history than even serious students of Ellingtonia know. It makes its first appearance on records when Victor Records, in the depth of the Depression, introduced the Long-Playing Record, as early as 1932.

An important new voice in the trumpet section was that of Clark Terry, previously with Charlie Barnet and Count Basie, most prominently. Aside from Terry, a non-soloing but important lead voice in the trumpet section is that of Andres Merenguito, also known as Fats Ford, who had served in Louis Armstrong’s last big band. Trombonists Booty Wood and Britt Woodman/ the former great with the plunger mute, the latter great with high notes, were both proof of Duke’s way of finding new voices with personal traits. But the star of the section is Quentin “Butter” Jackson, whose long career included stints with McKinney’s Cotton Pickers, Cab Calloway, and Don Redman, first from 1932 to 1939 and then again for the 1946 European tour that included Copenhagen’s first post-war visit by an American jazz band. Bassist Wendell Marshall, a cousin of the immortal Jimmy Blanton, had some of the family genes with his full, pleasing sound, fine intonation and solid time. Less known is drummer Jimmy Johnson, remarkably effective as a stand-in for the gifted but frequently absent Sam Woodyard (they shared the drum chair for a moment). And then, of course, last but by no possible means least, the Ducal piano, from which he directs like a master conductor and accompanist.

As is not always the case with live recordings he has a fine instrument at his disposal as it happens here in Berlin.