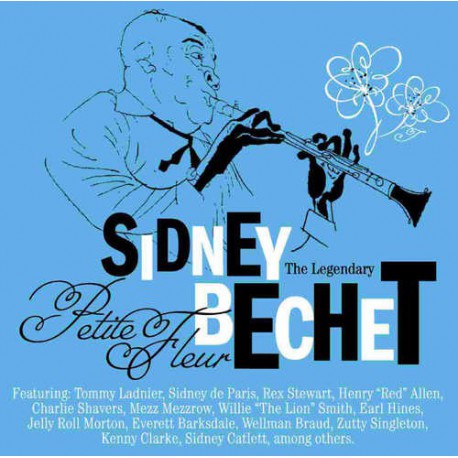 
Revered in France during the last decade of his life, Sidney Bechet was one of the seminal forces in the roots of New Orleans jazz and the first musician to give the soprano sax a voice in jazz. However, fame and recognition didn’t come early in his career. This was partly due to Bechet’s own mercurial temperament which, for instance, led to his incarceration in Paris in the late M1920s, after accidentally injuring a French woman with his gun during a dispute with another musician. Born on May 14, 1897 in New Orleans, he was one of the first renowned jazz soloists to make records (just a few months prior to Louis Armstrong, with whom he played and recorded a lot in the early twenties). He learned many instruments during his childhood, as shown on his 1941 “One Man Band” recordings, in which by means of overdubbing he is heard playing all the instruments in the group (Bill Evans would use this technique many years later on his album Conversations with Myself).
This collection compiles some of Sidney Bechet’s best works, including numerous collaborations with other jazz stars like Earl Hines, Willie “The Lion” Smith, Rex Stewart or Charlie Shavers, the two original “One Man Band” titles, and a poignant live version of his classic composition “Petite Fleur” recorded at the celebrated Salle Pleyel in Paris, his adoptive home.