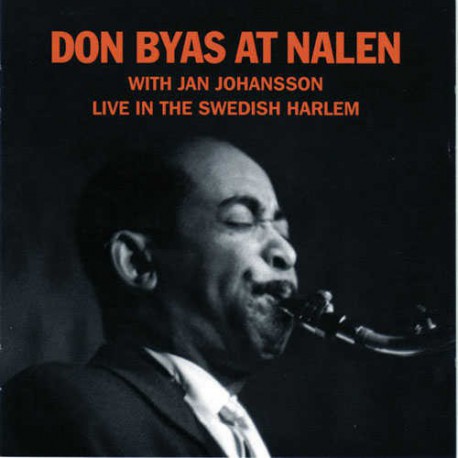 "Nalen, in Stockholm, was for many years one of Sweden’s most wellknown dance and cabaret venues. In the larger room there was non-stop dancing to the music of two big orchestras and sometimes dance- demonstrations or even competitions. The smaller room at Nalen was called Harlem. That stage presented amateur cabaret mixed with professional artists but most often concerts with local jazz musicians, sometimes performing with solo artists and even with entire jazz ensembles most often from U.S.A. ...

The musicians that played with Byas that winter of 1962 were ordinarily members of Arne Domnérus Octet, which was one of our house bands at that time... These live recordings went missing soon after they were recorded in 1962. Resurfacing now, they include about 30 minutes of music from one of his concerts, recorded by me. Later I found a recording made by the Swedish Radio which was recorded only five days after mine (I´ll Remember April) in such extraordinary musically quality that I just had to include it on this album. You’ll find the late great Jan Johansson on piano, Georg Riedel on bass, and Egil Johansen on drums. YOU WILL ALSO FIND two bonus tracks from the legendary concert in Town Hall, NYC, from june 9, 1945; the classic duo with Slam Stewart on bass in I Got Rythmn and Indiana."