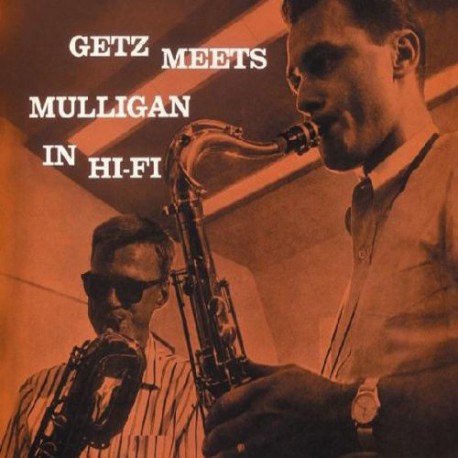 Prévenez-moi lorsque le produit est disponible
This release presents the complete album Getz Meets Mulligan on HI-FI, including the two last tunes from the session, originally issued on another LP Getz and Mulliogan's only collaboration ever in a quintet format. The trade horns on the album's first three tracks, allowing the listener the rare opportunuty  to hear Getz on baritone and Mulligan on tenor.

In the original liner notes, producer Norman Granz states that he was interested in the results of a front-line collaboration between saxophonists Stan Getz and Gerry Mulligan.
He also commented that this was the first time they recorded together as the primary horns of a session. Even though this project proved very successful musically and both musicians had known each other long before it was recorded, they would never again play together in this format (at least on records).

**** DOWNBEAT (1957) -A Getz-Mulligan meeting on record was, one supposes, inevitable sooner or later. In capturing both saxists for a joint date, in supplying them with a rhythm section of top calibre, it was produced a worldwide jazz album-. John A. Tynan