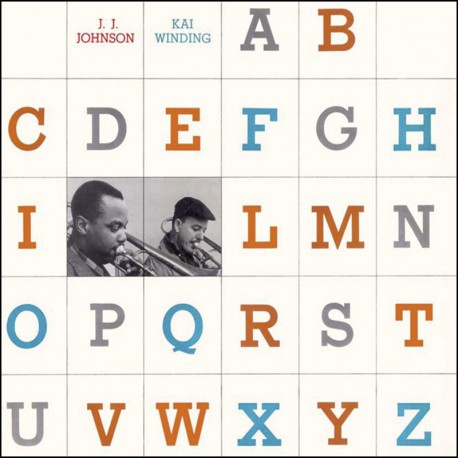 Prévenez-moi lorsque le produit est disponible
This release contains the complete LP JAY & KAII, one of the best albums by the Winding.Johnson quintet. As a bonus, six rare tracks: three concert performances by Jay & Kai at the 1956 Newport Jazz Festival, and three studio recordings presenting both trombonists as part of groups conducted by Quincy Jones, one of them taken from a long unavailable compilation LP titled the Giants of Jazz.


A frontline of two trombones was an atypical combination for jazz prior to the groundbreaking collaborations by Jay Jay Johnson (the first and primary exponent of bebop on his instrument) and Danish-born Kai Winding (a brilliant trombonist in his own right). The original LP Jay & Kai, presented here, included two complete sessions by the tandem plus a couple of tunes taken from different sessions.
Probably the original producers thought the results of both sessions were not long enough for an LP and decided to add two tracks, neither of which included the two trombonists. "I Should Care" was recorded for a quintet session with J.J. and Bobby Jaspar, which belongs to the sessions that produced the LP J Is for Jazz, while "Yes, You" was recorded by the Kai Winding Septet (without J.J.) for the session that produced the LP Trombone Panorama. The Newport tracks added here as a bonus first appeared on a Newport compilation coupled with tunes by the Dave Brubeck Quartet. Discographies list a fourth tune, "Thou Swell", as part of the same concert, but if it was recorded, it remains unissued. As a final addition, this CD also includes three rare tracks presenting Jay and Kai as part of groups conducted by Quincy Jones. The first two ("You're Crying" and "Funk Junction") were the only instrumental songs from an album featuring singer King Pleasure. The last one, which also includes two more trombonists, was the only issued tune from a February 25, 1955 session that according to discographies, produced more tunes which for some reason were never issued. "Grasshopper" only previously appeared on a compilation LP.