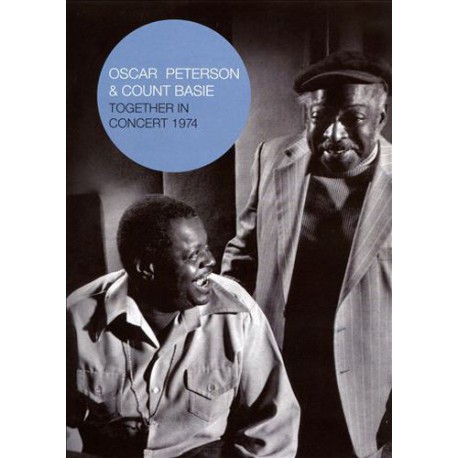 
This outstanding DVD - in color and with excellent image and sound quality - presents a complete and previously unissued live performance by two jazz giants: the recently deceased Oscar Peterson and the perennial Count Basie. They can be seen here in different settings. Peterson plays a couple of pieces alone, and then presents some amazing duets with Danish bassist Niels-Henning Orsted Pedersen. Basie plays a wonderful set with his big band, which at that time included such celebrated soloists as Jimmy Forrest, Al Grey and Curtis Fuller, plus singer Big Joe Turner who makes a special guest appearance. But the true climax of this concert, recorded in Prague on November 8, 1974, comes when Peterson calls Basie to the stand and both enjoy themselves having a friendly conversation with two pianos. Peterson was a great admirer of the Count, and they made some wonderful records together. Their first encounter in a recording studio took place in 1952, and in 1972, while playing a concert in Santa Monica, Basie spotted Oscar in the wings and dragged him to the piano for a couple of tunes. However, none of their five famous albums together ("Satch and Josh", "Satch and Josh Again", "Yes, Sir, That’s My Baby", "Nightrider" and "Count Basie Meets Oscar Peterson") had been recorded yet when this Prague concert took place. In fact, it must have been performed as a kind of warm-up for their first collaborative album, which was recorded in Los Angeles nearly a month later on December 2, 1974, after Peterson completed a November tour that took him to Russia and London (where he made a great studio album of duets with Dizzy Gillespie). The splendid Prague concert is a real delight to watch and listen to and the duets between these two master pianists gives ample proof of their mutual respect and admiration.