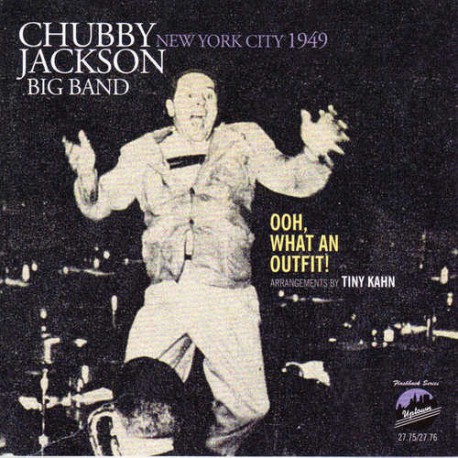 Bob Sunenblick's Uptown label continues with its research work to unearth obscure but always gratifying musical moments. Now it’s the turn of Chubby Jackson’s amazing 1949 big band. Chubby was never a best-seller, and a double CD set of this band won’t probably make anyone rich, but it will nevertheless give great amounts of pleasure to many jazz fans.

The orchestra was obviously inspired by the Woody Herman herds in which many of the main performers on these sessions had played, including of course its leader Chubby Jackson (1918-2003). The first large formation conducted by Chubby Jackson for records was with a sixteen-man unit including Al Porcino, Tiny Kahn (who would tragically died in 1953 of a heart attack at the age of 39), and Joe Harris (with arrangements by Al Cohn), which waxed four titles on February 24, 1949 (also included here). A couple of 1949 broadcasts of this orchestra live at the Royal Roost, in New York, exist, and they open this collection. It also includes a rare 1949 studio rehearsal presenting Chubby in the company of such stars as Al Cohn, Stan Getz, and Gerry Mulligan. Further rare recordings are featured on the second CD, which presents a series of 1947 small group sides waxed in Stockholm, a 1957 interview of Chubby by Don Manning, and an until now unlisted in discographies trio version of “My Ideal” showcasing Jackson in the company of Lennie Tristano and Billy Bauer.

Sound quality is obviously not hi-fi, but is always decent and the performances are spirited and never cease to amaze with their freshness. A 43-page booklet, in the Uptown tradition, presents detailed information about the dates and musicians, also including rare images and memorabilia.