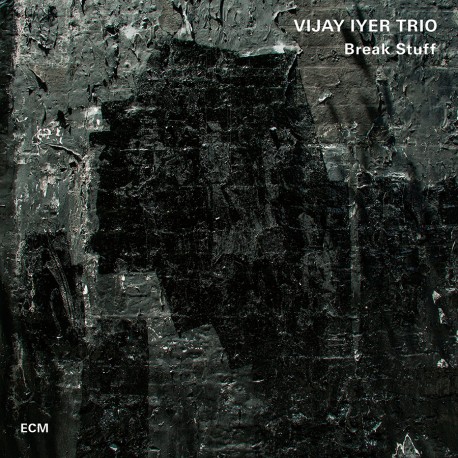 Break Stuff features Vijay Iyer’slong-running and widely-acclaimed trio with bassist Stephan Crump and drummer Marcus Gilmore, a band in existence for eleven years now. “We keep learning from each other and from experiences and try to set challenges for ourselves so that growth is part of the equation.” It’s a group whose musical language is informed by more than the jazz piano trio tradition. While Iyeracknowledges the influence of, for instance, Ahmad Jamal, Andrew Hill and Duke Ellington’s Money Jungle album (with Charles Mingusand Max Roach) upon his own trio aesthetics, he points out that his group has also been inspired by “James Brown’s rhythm section, Hendrix’s Band of Gypsys, Miles Davis’s rhythm section, Charlie Parker’s rhythm section, soul music from the 1970s, electronic music and hip-hop from very recent times…” The list goes on. The piece “Hood” on the new recording is a tribute to Detroit minimal techno producer and DJ Robert Hood. “He did all this really interesting music with numerical patterning –different rhythms unfolding through each other, but still in a very clear dance music framework, very textural and sound-oriented. You hear the evolution of timbre. It became a point of reference for us, to see if we could capture some of that spirit in a purely acoustic framework.”