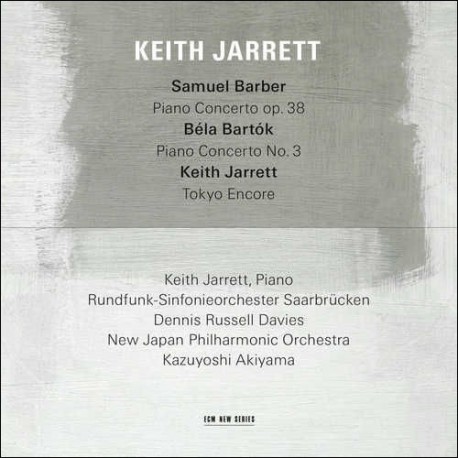 Keith Jarrett plays Samuel Barber’s Piano Concerto op. 38 and Béla Bartók’s Piano Concerto no. 3. These recordings, made in 1984 and 1985 in Saarbrücken and Tokyo, make a significant addition to the pianist’s discography as an interpreter of notated music. Jarrett’s recordings of classical repertoire for ECM have focused primarily on Bach and Mozart, though there are also exemplary albums of Handel’s keyboard music, and Shostakovich’s Bach-inspired Preludes and Fugues as well as a crucially important contribution to Arvo Pärt’s Tabula Rasa. Playing Fratres alongside Gidon Kremer, Jarrett’s participation would help to bring a then little-known Estonian composer to world attention. It was a richly creative period. Jarrett had just launched the jazz group with Gary Peacock and Jack DeJohnette that would become known as the Standards Trio and in parallel was giving classical recitals, and continuing with his solo piano improvisations. Splitting his time between jazz standards, the vast literature of classical music and free playing, Jarrett was juggling three different musical disciplines. But as Paul Griffiths points out in his liner note for Barber/Bartók/Jarrett there are some points of overlap.

Keith Jarrett
7. Tokyo Encore: Nothing But A Dream