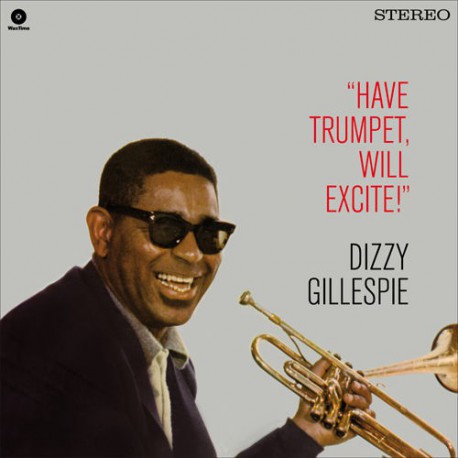 Have Trumpet, Will Excite

Have Trumpet, Will Excite

The music reissued here was the result of three consecutive sessions that took place on February 17, 18 & 20, 1959. By that time Dizzy Gillespie was fronting a quintet he had formed in early 1958. It was, therefore, a well rehearsed unit when they entered the studio to tape these sessions, which yielded enough material for two entire LPs, "Have Trumpet, Will Excite", presented here, and "The Ebullient Mr. Gillespie", as well as a few single tunes and alternate takes which would be issued on later editions. The group was noteworthy in that the fourth instrument – which was added to the typical rhythm section of piano, bass and drums – was Les Spann’s guitar (although Spann plays flute on a few songs) as opposed to another horn (which was far more typical of Diz’s formations). Therefore, Diz’s trumpet is nearly the only horn heard here. Recording under the wing of Norman Granz at this point, Gillespie’s repertoire strayed from the usual pop tunes and humorous vocals (there were just two tunes featuring Dizzy’s singing recorded on these three sessions, and one of them wasn’t issued on either of the two LPs). Instead the focus is placed exclusively on Dizzy’strumpet playing. Provided with a more serious repertoire of standards, Dizzy stands out as the great improviser he was, presenting interpretations that show in all possible ways why he was one of the trumpet stars of his era.