> Sellos>ECM>A Cosmic Rhythm With Each Stroke 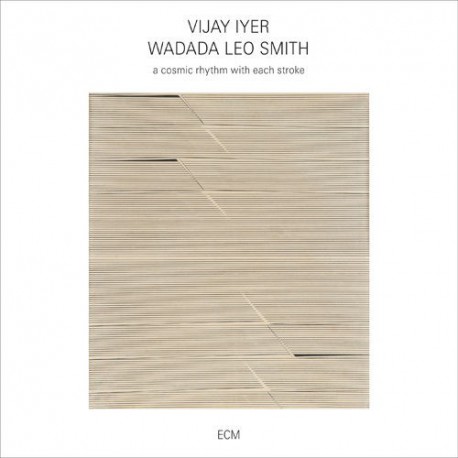 A Cosmic Rhythm With Each Stroke

A Cosmic Rhythm With Each Stroke

"A Cosmic Rhythm with Each Stroke" features Vijay Iyer and his “hero, friend and teacher”, Wadada Leo Smith. Vijay previously played extensively with Wadada in the trumpeter’s Golden Quartet. As he recalls in the liner notes here, “That group’s broad palette included ‘pure’ tones and distorted sound, motion and stillness, melody and noise. In quartet performances, Wadada and I often became a unit within the unit generating spontaneous duo episodes as formal links.

In the process, a space of possibility emerged that introduced me to other systems of music-making. We have continued this approach in recent years…” A particularly inspiring collaboration at New York’s The Stone early in 2015 underlined the affinity of their sounds and concepts and made the documentation of the duo a priority. Hence this album, produced by Manfred Eicher at New York’s Avatar Studios in October 2015, which captures the improvisational magic of the duo, the expressive individuality of the participants and the ways in which they can – as Wadada Leo Smith says – “merge as a single wave, or a single voice.”

A Cosmic Rhythm With Each Stroke for Nasreen Mohamedi
02. All Becomes Alive
03. The Empty Mind Receives
04. Labyrinths
05. A Divine Courage
06. Uncut Emeralds
07. A Cold Fire
08. Notes On Water
09. Marian Anderson