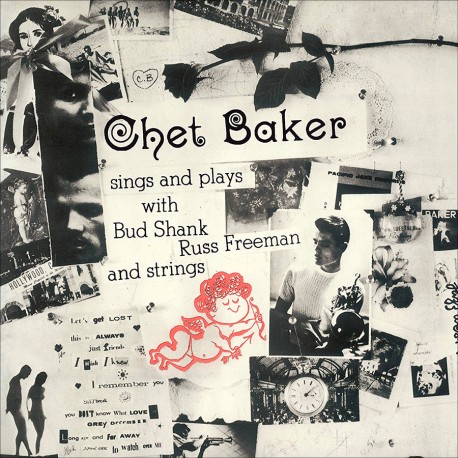 The amazing Chet Baker (1929-1988) shined both as a trumpet player and as a singer. This fact is widely accepted today, but when the first sessions featuring him on vocals were issued, it was quite a surprise. Both his trumpet and voice seem to be extensions of the same musical personality, and once you’ve become familiar with the dual facets of Baker, you expect to hear them both. With the growing popularity of his first vocal album," Chet Baker Sings", Pacific Jazz producer Richard Bock wanted to capitalize on both sides of his young star’s abilities. Hence, the trumpeter turned vocalist entered the studio in 1955 with both his quartet, featuring pianist Russ Freeman, and an expanded sextet including bassist Red Mitchell, Bud Shank on flute, and various string players.

The resulting album, Chet Baker Sings and Plays, helped set in stone the image of Baker as the jazz world’s matinee idol and icon of ‘50s West Coast cool. His laid-back style, a mix of ‘30s crooner and Miles Davis’ nonet recordings, appealed in its immediacy to a jazz public tiring of the hyper, athletic musicality of bebop. Similarly, his plaintive, warm trumpet sound was the more sensitive antidote to such brassy kings as Dizzy Gillespie and Clifford Brown. William Claxton’s distinctive collage cover for "Chet Baker Sings" and Plays" also became a classic in its own right.

CHET BAKER, vocals & trumpet on all tracks, with:

(*) BONUS TRACK: From the same sessions, but not included on the original LP.