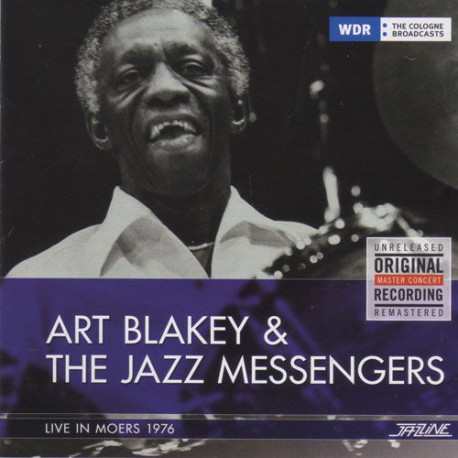 The late 1960s saw the ascendance of rock music in popular culture, and the jazz world was experimenting with free jazz and jazz fusion, styles Art Blakey did not care. Thus, it was difficult for Blakey to maintain a steady lineup for the Messengers, during this period, and even more difficult to produce recordings. Between 1966 and 1972, the Messengers produced only a single official record: Jazz Messengers '70, a live date in Tokyo. This particular lineup included Bill Hardman, Carlos Garnett, Joanne Brackeen and Jan Arnet.

In 1976 the Messengers recorded an album for Roulette, Backgammon, featuring Hardman, Schnitter, Dailey and Suzuki. In that same year, Blakey began a professional relationship with Wim Wigt, a Dutch music booker and owner of the Timeless label. Wigt booked the Messengers throughout Europe, and from that tour come the previously unissued concert at the Moers Jazz Festival, in Germany, presented here, which was taped on June 4, 1976.

The formation of the Messengers on that tour included Blakey, Hardman, tenor saxophonist David Schnitter (born in New Jersey in 1948, he worked in and out with Blakey from 1974 to 1979; he also played with Freddie Hubbard, Frank Foster, Charles Earland, and Groove Holmes); well known North Carolina pianist Mickey Tucker (now living in Australia; he also worked with Junior Cook, James Moody, Frank Foster, Roland Kirk, Eric Kloss, Thad Jones and Mel Lewis, among others); and bassist Chris Amberger (who also recorded with Red Garland, Rosemary Clooney, Larry Baskett, and Lisa Bernstein; Amberger only worked with Blakey on the 1976 European tour, and didn’t record any studio album with the Messengers).
The repertoire on the Moers concert draws back from many different sources, going back to the late fifties (“Blues March”, “Along Came Betty”, “I Can’t Get Started”), but also including three more recent songs, all of them composed by pianist Walter Davis, Jr. “Backgammon” and “Uranus” had been recorded by Blakey for the aforementioned 1976 LP. “Gipsy Folk Tales”, on the other hand, is a true rarity, for Blakey never recorded it in the studio, and only another version of that tune by the Messengers seems to exist, taped live in Volksbuhne, East Berlin, in 1980.