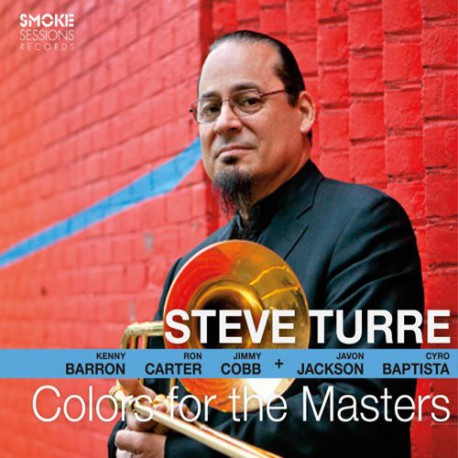 Colors For the Masters

Colors For the Masters

Trombonist Steve Turre has quietly become an eminence grise of mainstream jazz, a veteran with unerring instincts who brings elegance, bluesiness, and rhythmic sophistication to just about everything he touches.

That shows clearly on his new album "Colors for the Masters" were he teams up with a dream rhythm section of legendary elders, each of whom shaped the trombonist’s distinctive voice: pianist Kenny Barron, bassist Ron Carter and drummer Jimmy Cobb.

The album’s ten songs, evenly split between jazz standards and original tunes, and title are meant as an acknowledgment to his bandmates, but it also applies to the likes of J.J. Johnson, Curtis Fuller, and Jimmy Cleveland, trombonists in the classic tradition Turre carries forward.

On four tunes the band is joined by saxophonist Javon Jackson, like Turre an alumni of Art Blakey’s Jazz Messengers; and for the album’s final tune, a stirring rendition of Jobim’s “Corcovado” on which Turre shows off his innovative shell playing, virtuoso percussionist Cyro Baptista also joins in. Together, they pay electrifying homage to other, departed luminaries like John Coltrane and Thelonious Monk.