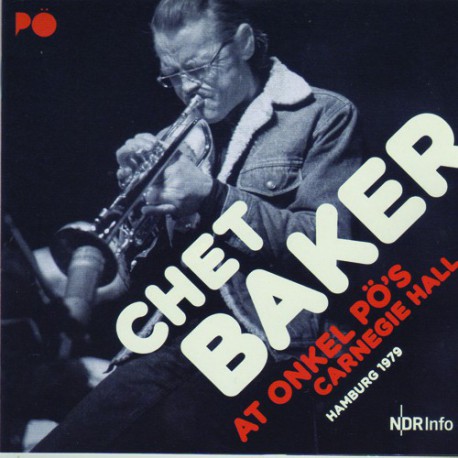 If anyone played the trumpet in a cool way it was Chet Baker; he always performed at the same level of excellence regardless of his personal life chaos. The legends surrounding his life were always omnipresent. However At Onkel Pö every sound of the recording makes one forget all reservations, all the skepticism towards the media phenomenon.

Baker‘s music is crystal clear, powerful, compact and focused. He does not rely on the instrumental routine. Eloquently he tells the story of the compositions he selected for that evening; just ¬ five pieces for 100 minutes – Cole Porter‘s standard “Love for sale“ as an opener, interpreted in a slightly rocky way, then the empathic fable „You can‘t go home again“ by Don Sebesky, followed by „There‘ll never be another you“ by Harry Warren as a showcase for Baker‘s unique, fragile and yet seductive scat, as well as two true highlights: “Black eyes“ by Wayne Shorter and „Broken Wing“ by Richie Beirach … Chet Baker himself never composed a song – but like no other, he was able to absorb and understand the best music ideas of his contemporaries; he was a master in the art of dealing with masters and truly “congenial“; this often misused word is absolutely warranted here.