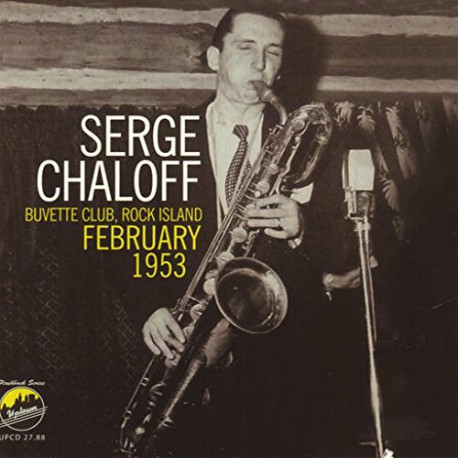 Prévenez-moi lorsque le produit est disponible
Uptown Records' new issue presents us with a real gem, a complete live performance in a quartet setting by baritone saxophonist Serge Chaloff taped at the Buvette Club in Rock Island in February of 1953. Unanimously considered among the very few real masters of his instrument, Chaloff's career was greatly limited by addiction to heroin. After successfully giving up drugs, he developed cancer of the spine which caused his early death in 1957 at the age of 33. This makes precious every bit of the music he recorded. Surrounded by an unfamiliar piano trio, all of the focus here is on Chaloff, who performs songs he never or rarely recorded on other occasions, such as "Willow Weep for Me", "Ninety-Nine Guys", "Tea for Two", "Move", Gigi Gryce's "Wildwood", and "Autumn in New York". Sound quality is good in general, but having this music its origin on an old forgotten tape, there are small flaws here and there which do not at all diminish the miracle of having this music in our hands.