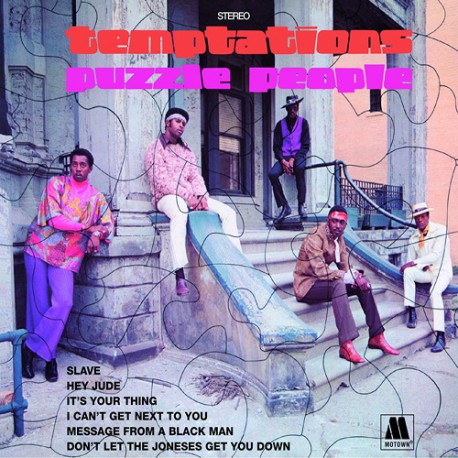 Produced entirely by Norman Whitfield, The Temptations’s "Puzzle People" takes the next step along the path that Cloud Nine started, and takes the Detroit band further away from a classic soul sound, and more towards the realm of psychedelic soul. Although a few ballads, including “Running Away (Ain’t Gonna Help You),” are still present, the album is primarily composed of Sly & the Family Stone/James Brownderived proto-funk tracks such as the lead single “Don’t Let the Joneses Get You Down,” and the number-one Billboard Pop hit “I Can’t Get Next to You.” Also included are psychedelic-styled covers (recorded with distorted guitars, clavinets, and spacy reverb and sound effects) of contemporary songs such as The Isley Brothers’ “It’s Your Thing,” The Beatles’ “Hey Jude,” and Roger Miller’s “Little Green Apples.”

"Puzzle People" was released on the same day (September 23, 1969) as "Together", a duets album of covers by The Temptations and label mates Diana Ross & the Supremes. It peaked into the Top 5 on the Billboard Pop Albums chart, and spent fifteen weeks at number one on the R&B Albums chart.

Recorded at Hitsville U.S.A. (Studio A) and Golden World Studios (Studio B)
in Detroit, Michigan between October 1968 and July 1969.

07. You Don’t Love Me No More
Lead singer: Eddie Kendricks