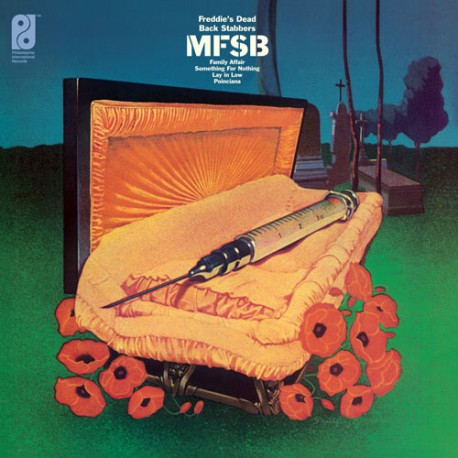 Elemental Music presents MFSB, the debut album by Philadelphia International Records houseband MFSB, originally released in 1973. MFSB (Mother Father Sister Brother) was a pool of more than thirty studio musicians based at Philadelphia’s famed Sigma Sound Studios. They worked closely with the production team of Kenny Gamble and Leon Huff and producer/arranger Thom Bell, and backed up such groups as Harold Melvin & the Blue Notes, The O’Jays, The Stylistics, The Spinners, Wilson Pickett, and Billy Paul, among others.

The album includes instrumental covers of “Back Stabbers” by The O’Jays, “Family Affair” by Sly & The Family Stone, and “Freddie’s Dead” by Curtis Mayfield. In 1974, MFSB released “T.S.O.P. (The Sound of Philadelphia)”, also known as the TV Show Soul Train’s theme, their first and most successful single, which peaked at number one on the US Billboard pop and R&B charts. MFSB would become known for the hi-hat-dominated disco sounds so popular in the late 1970s and their sound was influential in establishing the disco sound.