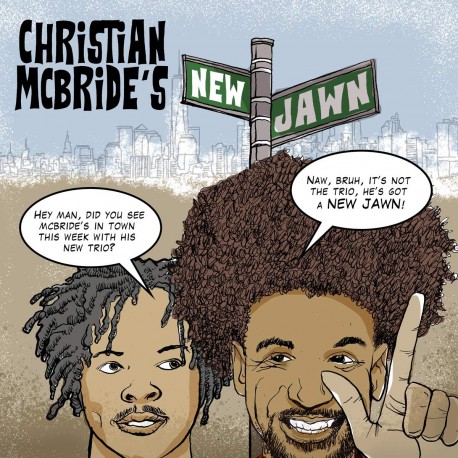 If there’s one thing the acclaimed bassist knows, it’s that when it comes to grit there’s no better resource to draw from than his own hometown, Philadelphia. So, McBride turned to one of the city’s most beloved colloquialisms to christen his latest project, Christian McBride’s New Jawn. On the band’s eponymous debut, these four stellar musicians ably walk the razor’s edge between thrilling virtuosity and gut-punch instinctiveness. The release will be available on October 26, McBride’s own newly launched imprint of his longtime label, Mack Avenue Records. Departing from the sound of Inside Straight and the Christian McBride Trio, bass giant McBride fronts New Jawn (derived from Philadelphia slang), a quartet with no chordal instrument. The album has the spark and loose feeling of a live set, its spacious harmonic language articulated with equal parts rigor and abandon by tenor saxophonist Marcus Strickland and trumpeter Josh Evans. Each player writes two tunes, beginning with McBride’s lopsided scene-setter “Walkin’ Funny” and later his modern waltz “John Day” (with Strickland doubling on bass clarinet). Drummer Nasheet Waits, with his unique facility and expression in every context, from free-form to hard swing, contributes “Ke-Kelli Sketch” and the affecting ballad “Kush” (another bass clarinet piece). Evans’ entries range from the darkly hued “Ballad of Ernie Washington” to the Caribbean-tinged “Pier One Import,” while Strickland’s “The Middle Man” and “Seek the Source” bring the heat and light of surging uptempo post-bop and idiosyncratic blues in turn.