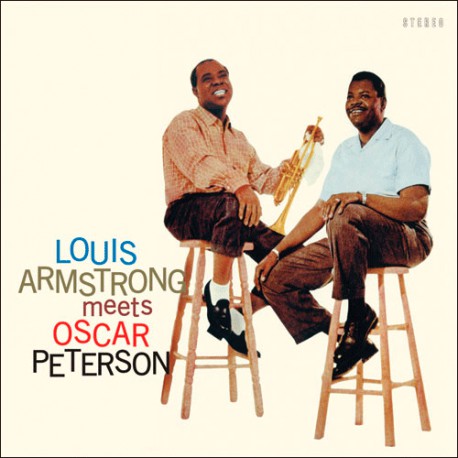 NEW COLLECTION OF COLORED CLASSIC LPs
EACH LP HAS ITS OWN UNIQUE STICKER!!

In the mid-fifties, Norman Granz’ decision to change Louis’ studio environment was greatly welcomed by the jazz world. The producer replaced Satchmo’s All Stars with the Oscar Peterson Trio plus Louie Bellson on drums on a number of sessions; set up the vocal partnership of Louis with Ella Fitzgerald on others, and even produced a whole “conceptual album” with selections from Gershwin’s Porgy and Bess, arranged and conducted by Russell Garcia. All five projects are deservedly recognized among Louis’ best records ever. Greater emphasis was placed on Satchmo’s vocals than on his trumpet playing on his albums with Granz (one of the very few points of detraction among contemporary critics). However, everyone would agree that Louis was a superb and unique singer, and that his vocal interpretations are in many cases almost “instrumental”. Of equal importance is the fact that, although most of the songs chosen were already well known standards by 1957, Louis had never previously recorded the majority of them (and he would never record them again). Therefore all of these versions an be considered one-of-a-kind gems. Besides, no other horn is heard to interfere with Louis’ unique way of recreating a song, and Peterson’s accompaniment is as creative as it is unobtrusive.

1 THAT OLD FEELING
2 LET’S FALL IN LOVE
3 I’LL NEVER BE THE SAME
4 BLUES IN THE NIGHT
5 HOW LONG HAS THIS BEEN GOING ON?