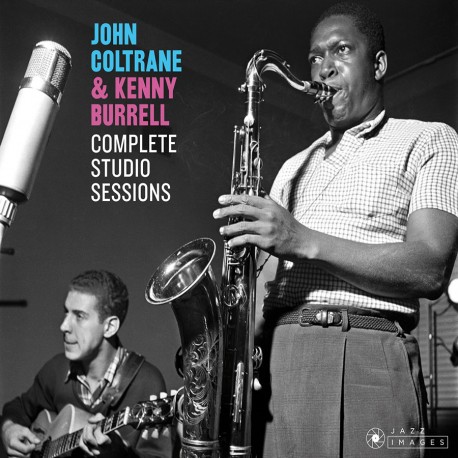 John Coltrane and Kenny Burrell first played together in 1951 as members of the Dizzy Gillespie band. From 1956 to 1958 they would also participate on four albums together: Paul Chambers’ Whims of Chambers (Blue Note BLP-1534), Interplay for 2 trumpets and 2 tenors (Prestige 7112), Tommy Flanagan’s The Cats (New Jazz NJLP-8217), and finally Kenny Burrell & John Coltrane (Prestige/New Jazz NJLP-8276), on which they were co-leaders, and which includes the rare chance to hear them playing a tenor sax-guitar duet (on “Why Was I Born?”). Presented here are all of their tracks together from the aforementioned albums.

One of the most renowned jazz photographers of all time, Francis Wolff (1907-1971) was also a record company executive and producer, whose skills were essential to the success of the Blue Note record label. Born Jakob Franz Wolff in Berlin, Germany, he soon became a jazz enthusiast, despite the government ban placed on this type of music after 1933. A Jew, in 1939 he left Berlin, where he had worked as a commercial photographer, and established himself in New York. He began working there with his childhood friend Alfred Lion, who had co-founded Blue Note Records with Max Margulis. The latter soon dropped out of any involvement in the company, and Wolff joined Lion in running it. Wolff took thousands of photographs during the label’s recording sessions and rehearsals. His highly personal visual concept would be forever associated with both Blue Note and jazz as a whole.