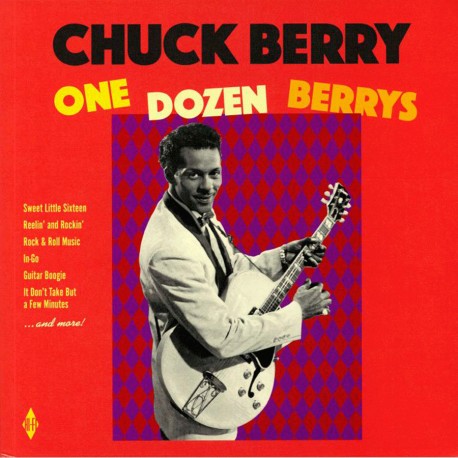 This collector’s edition includes Berry’s second LP, One Dozen Berrys, originally released in March 1958 by Chess Records. The album contains twelve songs, six of which were issued as singles after the release of Berry’s debut album (titled After School Session). Of the other six tracks (which hadn’t been previously released as singles), “La Jaunda” is worth mentioning as it gives evidence of Berry’s appreciation for Latin music.

The instrumental “Blue Feeling” is a look at the blues sound that Berry initially proposed to bring to Chess Records and is featured on the album twice: in its original form and in a half-speed version entitled “Low Feeling.” Additional songs on the LP include “Guitar Boogie,” a killer track and another guitar instrumental (one of four on the album). The song was a pumping, soaring showcase for Berry’s guitar that had some of the most impressive pyrotechnics that one was likely to hear in 1957. Also deserving of mention are “In-Go,” the rippling guitar/piano workout of “Rock at the Philharmonic,” and Berry’s slow ballad “How You’ve Changed,” sung in a manner closer to Nat “King” Cole than to any rock & roller of the era. The album’s closer, “It Don’t Take but a Few Minutes,” is a reminder of just how much Berry owed to country music for his sound, and how he could have been mistaken for a white hillbilly in those early days.

CHUCK BERRY vocals and guitar, plus: