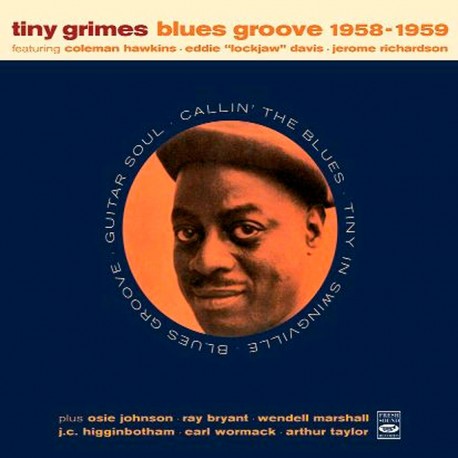 Legendary guitarist Tiny Grimes made his big comeback to the jazz/blues recording field in 1958 with these three albums he made for the Prestige/Swingville series. Jazzwise, he had stayed away from the studios for a long time, playing rock ‘n’ roll in Midwestern nightclubs. In these fine sessions, the beat and blues-drenched, dirty sound of Tiny’s guitar is escorted by a group of outstanding jazzmen including pianist Ray Bryant, tenors Coleman Hawkins and Eddie “Lockjaw” Davis, reedman Jerome Richardson, trombonist J.C. Higginbotham, bassist Wendell Marshall, and drummer Osie Johnson. Where most—if not all—guitarists were using six-string models, Tiny continued to use a four-string box. “There’s nothing I can’t do with the four except maybe in playing rhythm. A lot of the cats today are only using four of their six strings anyway.”