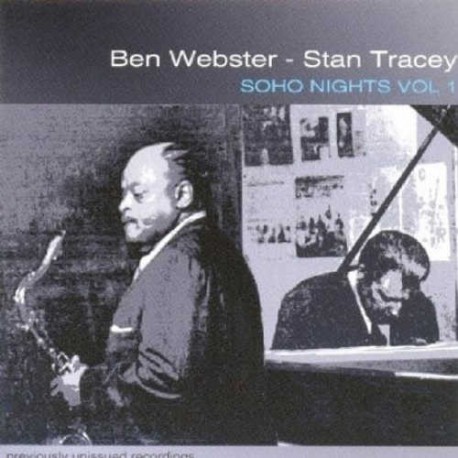 Recorded live at Ronnie Scott’s Club in 1968, this previously unreleased, digital remastered recording of the “tenor giant”, then aged 58, performing with Stan Tracey in-house trio at the time, perfectly captures the atmosphere of the club in 1968 ( including Ronnie Scott as MC !). It is the first volume of recently discovered tapes by Stan Tracey of his in-house time at the club performing with well known American artists touring Europe. Along with Simon Spillett’s superb liner notes, this release is one that jazz fans can buy with confidence, and there are plans to issue more archive material to demostrate the importance of Stan Tracey’s musical accomplishments.

Webster could be a difficult man and periodically he was seriously drunk. On his first arrival in Britain he had to be removed from the boat train at Victoria Station on a porter’s trolley. But on this newly rediscovered session, recorded at Ronnie Scott’s Club in 1968, he is on marvellously mellifluous form.
PERSONNEL: