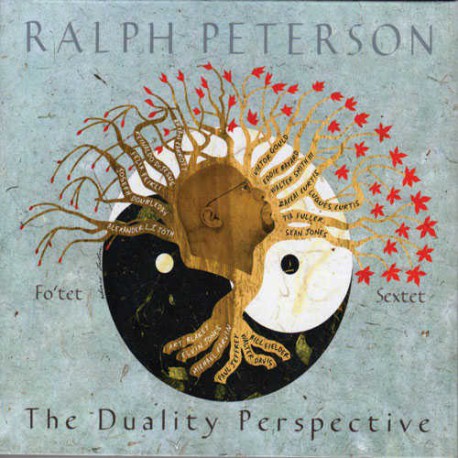 Ever since his masterful ’80s/’90s Blue Note titles, including V, Volition and Art (which remain out of print), Ralph Peterson has been renowned as a rhythmic storm bringer. Peterson’s Combustible drumming recalls a cross between Art Blakey, Michael Carvin and Elvin Jones. Peterson scalds rhythms clean where most handle them like good-natured puppies. This asn’t always served him well. He’s overplayed on some gigs, leaving a cloud of stunned audience members in his wake. But he has matured through without losing his fire. The Duality Perspective is a culmination of his many years as a composer, drummer and teacher. His familiar arrangements of crisscrossing rhythms, floating melodic themes and percolating soloing spaces are typically augmented by his favorite foils: vibraphone and alto saxophone. The Duality Perspective features Peterson’s “Fo’Tet” and sextet, somewhat interchangeable groups that find the drummer expressing similar themes in different configurations. Peterson still composes knockouts like “One False Move” and “Princess,” but his new ballads are lovely. Like Blakey, Peterson possesses a gritty, garrulous, inspiring style. Equally so, his groups are tested-by-fire vehicles exposing new talent.
- Ken Micallef - October 2012

“... one of Art Blakey’s last protégés, and he seems to have drawn a lot from his mentor: a gregarious comfort in the leader’s position; a flaying mastery that drives his bands without flagging” - Jazz Times