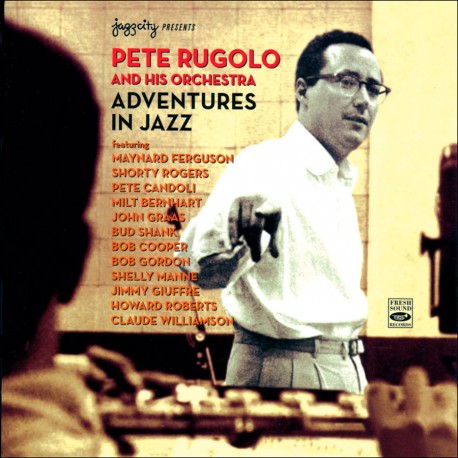 THIS EXCITING NEW 2-CD RELEASE FEATURES ALL THE TRACKS FROM PETE RUGOLO'S THREE CELEBRATED LPs FOR THE COLUMBIA LABEL.

In the early Fifties Pete Rugolo was best known for his work as Stan Kenton’s chief arranger. After that, he spent five years arranging music for singers and writing Hollywood film scores. Then, in January 1954, he signed on with Columbia Records as an important part of their plans to expand both their dance and jazz divisions. "As I got going with the writing and recording, I became enthusiastic about the possibilities of the sound I could have with my own band," said Pete, after gathering a band of 20 men made up by the top-rated sidemen in the Hollywood studios. This CD set includes the complete songbook Pete Rugolo managed to record with his orchestra between 1954 and 1955. We can hear instrumentation including French horn, oboe, flute, piccolo, celesta, tympani, timbales, bongos and tuba in addition to the regular complement. There are accordingly some unusual voicings and resultantly pleasant tone colors that reflect the Milhaud influence. Yet, these are the very particular musical adventures of an accomplished, imaginative and successful writer. In them, Rugolo skilfully incorporates the essence of jazz and sprays it with his ever-present sense of humor.